Today I’m thrilled to be hosting the next leg of The Good Daughter by Alexandra Burt blog tour. Unfortunately I haven’t been able to read it yet as my TBR pile is in danger of suffocating me! But I do have an intriguing extract from the book. Billed as a gripping, suspenseful, page-turning thriller The Good Daughter is published by Avon and it’s available now. I also have a giveaway for a paperback copy of The Good Daughter, so don’t forget to enter, link to the competition can be found at the bottom of this post

Alexandra Burt was born in a baroque town in the East Hesse Highlands of Germany. Mere days after her college graduation, she boarded a plane to the U.S and worked as a freelance translator. Determined to acknowledge the voice in the back of her head prompting her to break into literary translations, she eventually decided to tell her own stories. After three years of writing classes her short fiction appeared in online magazines and literary reviews.

She currently lives in Central Texas with her husband, her daughter, and two Labradors. She is an outspoken animal welfare supporter, and a proud vegan. One day she wants to live in a farmhouse and offer rescue dogs a comfy couch to live out their lives.She is a member of Sisters In Crime, a nationwide network of women crime writers.

What if you were the worst crime your mother ever committed?

Dahlia Waller’s childhood memories consist of stuffy cars, seedy motels, and a rootless existence traveling the country with her eccentric mother. Now grown, she desperately wants to distance herself from that life. Yet one thing is stopping her from moving forward: she has questions.

In order to understand her past, Dahlia must go back. Back to her mother in the stifling town of Aurora, Texas. Back into the past of a woman on the brink of madness. But after she discovers three grave-like mounds on a neighbouring farm, she’ll learn that in her mother’s world of secrets, not all questions are meant to be answered…

To win a paperback copy of The Good Daughter enter here……

Competition closes at midnight Friday 10th March 2017, sorry but this giveaway is open to UK residents only. Winner will be contacted within 24 hours of competition ending

Check out the rest of the blog tour 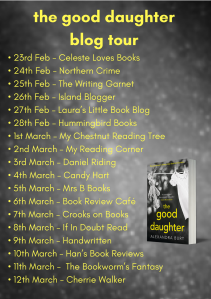 My favourite kind of birthday cake vanilla and white chocolate drip cake from my lovely hubby, made by my very talented niece @k_kenyon #birthdaycake #birthdaygirl👑 #dripcake #dripcakesofinstagram #dripcakechocolate
Another book buy for me I couldn’t resist The End Of Men by @christinasweeneybaird after reading one of my favourite #bookbloggers @jojororomaman fabulous review for this book.
Latest book I’ve bought The Locksmith by Linda Calvey. I’m a huge fan of what I call gritty #crimethriller so really looking forward to this one
Have just finished #reading The Secrets Of Us by @lucindaberryauthor
My thanks to @harpercollinsuk for my #gifted copy of Daughters Of Cornwall by Fern Britton. I do enjoy a read with a dual timeline and It sounds so good
#haveread The Hollows by Mark Edwards. My full review can be found @goodreads
Another @amazonkindle buy and such a fantastic crime series Stone Cold Dead by Alex Smith
My latest #kindlepaperwhite buy Siren By @sammichaelsgg if you enjoy a gritty crime series then I would highly recommend this series