Today I’m thrilled to be part of the blog tour for Dark Waters by Mary-Jane Riley. This book is described as A darkly compelling psychological thriller, full of twists and turns, perfect for fans of Louise Jensen, Cass Green and Alex Lake. For my stop of the blog tour the author has written  A day with author……… post

First of all here is the book description to whet your appetite.

Secrets lie beneath the surface…
Two men, seemingly unconnected, are discovered dead in a holiday boat on the Norfolk Broads, having apparently committed suicide together.
Local journalist Alex Devlin, planning an article on the dangers of internet suicide forums, starts digging into their backgrounds.
But Alex’s investigation soon leads her to a much darker mystery – one that will hit closer to home than she could possibly have imagined, and place the lives of those she loves in terrible danger.

We (my husband and I) are woken up bang on seven in the morning by Reggie, the youngest of our two golden retrievers, who, until then has been sleeping (relatively peacefully) down by the side of my bed. He is so reliable as an alarm clock that we haven’t set an actual alarm for over a year. My husband gets up and makes me a cup of tea before he goes off to work (he is a television reporter). I stay in bed and listen to the news for another half-hour or so. This is luxury for me as I had years of getting up at just after five for my job.

About half-past eight I take the dogs out. We are lucky to live in a small village with a lot of countryside around, and a large area of common land at the bottom of our garden. I find the walk really useful for thinking about what I’m writing, solving plot problems, working out my characters and how to move them from one place to another. 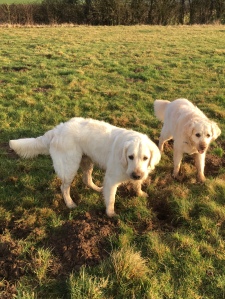 When I get back I fiddle about having some yoghurt and honey and tidying up a bit before making a coffee and hitting that writing desk…..where I fiddle and faff about some more, having a quick look at twitter and e mails and Facebook and Instagram and then I open up the document with writing in it…and begin. Hopefully I will have left the previous days masterpiece in the middle of a scene or I’ve worked out what I’m going to say while on the walk so I’m not sitting there wondering where to go next.

I turn the WiFi off. Then have to turn it on again when I need to research something or look at a map (necessary for what I’m working on at the moment) so have to be very firm with myself and turn it off again or maybe I will fiddle about on social media…I do have the attention span of a gnat! 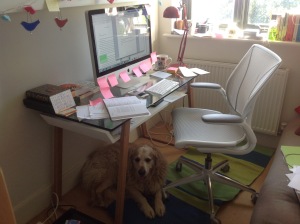 More coffee and a thousand words later (hmm… a bit of creative licence there…) it’s time to take the dogs out again…a shorter walk this time and I take the opportunity to listen to a play or the omnibus edition of The Archers or the Kermode and Mayo film podcast – fabulous stuff if you like film!

Back to the desk for thirty minutes, then lunch and then… *whispers* a little sleep (sometimes curled up with Reggie on the futon thing in my study) or watch something on Netflix – often something recommended by author Mark Edwards (though he doesn’t know I take him up on his Twitter recommendations!) before feeding the dogs (see how they dominate!) and then doing bits of housework, like making up the fire, cleaning the floors (dogs, remember?) and other dreary tasks. I might do some more writing before my husband gets home at about 8.15pm. Then it’s a glass of wine (just the one?) and maybe a chat with one of the children (two boys and a girl, all of whom have left home).

This is an ideal writing day which happens occasionally, though is more often than not interrupted by real life and shopping. And it has taken years of writing around the children and the day job and many, many rejections to get to this point.

I have, of course, glossed over the tears and the swearing and the banging of head on desk when the writing doesn’t go according to plan! 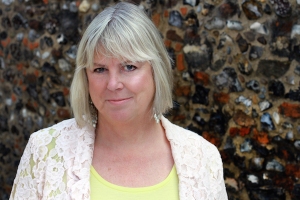 Mary-Jane wrote her first story on her newly acquired blue Petite typewriter. She was eight. It was about a gang of children who had adventures on mysterious islands, but she soon realised Enid Blyton had cornered that particular market. So she wrote about the Wild West instead. When she grew up she had to earn a living, and became a BBC radio talk show presenter and journalist. She has covered many life-affirming stories, but also some of the darkest events of the past two decades. Mary-Jane has three grown-up children and lives in Suffolk with her husband and two golden retrievers.

Links for the authors books:

My thanks to @viper.books 🐍for my #gifted copy of The Last Thing He Told Me by Laura Dave this book sounds fantastic
My thanks to @penguinukbooks for my #gifted copy of Liar by Lesley Pearse out June 2021
My thanks to @zaffrebooks for my #gifted copy Of Trust Me by @tmloganauthor Trust Me is a fast-paced mystery that has all the elements needed for an exciting read, misdirection, unreliable characters and a plot that’s complex and well executed. Highly recommended to all thriller lovers.
#Gifted 5 ⭐️⭐️⭐️⭐️⭐️ for Twisted Lies by @angiemarsons @bookouture my full review can be found on @goodreads
#latestbookbuys #nevertomanybooks Tall Bones by Anna Bailey, I have read some good things about this book, have you read it? What did you think?
#happyeaster 🐣🐥look what I spotted in the #sky today #smile #bristolphotographer #ilovebristol