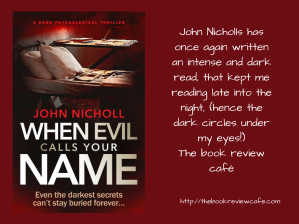 Today I’m thrilled to be one of the stops on the #BlogBlitz tour for When Evil Calls Your Name by John Nicholl. Published by the awesome Bloodhound Books this is one series you don’t want to miss, especially if like me you enjoy a darker more sinister psychological  thriller.

When twenty-nine-year-old Cynthia Galbraith struggles to come to terms with her traumatic past and the realities of prison life, a prison counsellor persuades her to write a diary exploring the events that led to a life sentence for murder.

Although unconvinced at first, Cynthia finally decides she has all the time in the world and very little, if anything, to lose. As she begins writing she holds back nothing: sharing the thoughts she hadn’t dare vocalise, the things that keep her awake at night and haunt her waking hours.

Will the truth finally be revealed?

White Is The Coldest Colour by John Nicholl introduced the reader to Dr David Galbraith, a highly trusted and respected child psychiatrist, but in reality Galbraith was a sadistic predatory paedophile. We were also introduced to Galbraith’s wife Cynthia. When Evil Calls Your Name is very much about Cynthia who is now serving a prison sentence and struggling to come to terms with her traumatic past and the realities of prison life. I should mention I really don’t think you will be able to appreciate the full impact of Cynthia’s story without reading would White Is The Coldest Colour first.

This is a book that is very much character driven, the author certainly gets inside the head of Cynthia and he doesn’t skimp on the gritty or troubling details of her life. When Evil Calls Your Name answers many of the questions I had about Cynthia. In the previous book I wanted to shake her and tell her “to get a grip”, she appeared weak and in awe of her psychopath husband, but after reading her story it all makes sense.

Through Cynthia’s writing we learn so much more about her, how she went from a confident carefree student to a shadow of herself. Galbraith is a master in manipulation,  and John Nicholl explores his behaviour with a chilling sense of realism.  By the the end of the book my views on Cynthia had completely changed, I could empathise with her and appreciate what she went through. When Evil Calls your name is a disturbing read,  as you can’t help  but imagine the awful things Cynthia had to put up with living with such an evil and controlling husband. You feel her anxiety, despair and fear.

John  Nicholls has once again written an intense and dark read, that kept me reading late into the night, (hence the dark circles under my eyes!). A solid conclusion to the Galbraith series and although not fast paced, it’s an intriguing read that explores abusive relationships with an incredible insight into a difficult and disturbing subject.

John Nicholl, an ex-police officer, child protection social worker and lecturer, writes popular dark psychological suspense thrillers, each of which has been an Amazon international bestseller, reaching # 1 in multiple categories in the United Kingdom, France, Spain, Australia, Canada and the USA. John is happily married, lives in rural west Wales, and has three adult children and one grandchild. He began writing after leaving his job heading up child protection services for Carmarthenshire. A Cold Cold Heart, John’s sixth book, is published by Bloodhound Books in January 2018. John is represented by Toby Mundy – Literary agent at TMA.

Thanks go to Bloodhound Books, John Nicholl and Sarah Hardy for an advanced readers copy of When Evil Calls Your Name to read in exchange for an honest review