Today I’m sharing my review for The Secret Child by Caroline Mitchell, the second book in the DI Amy Winters series and what a cracker this series is turning out to be. You can read on for my thoughts…..

Four-year-old Ellen is snatched by a stranger in the dead of night. Her devastated mother, Nicole, receives four identical phials and a threatening note in a familiar scrawl that chills her to the bone. But she always knew this would happen. She’s been expecting it for years . . .

According to the note, one of the phials is poisoned. Nicole is given a deadly challenge: if she drinks one, the sadistic kidnapper will notify the police of Ellen’s location. The sender claims to be Luka Volkov but Luka is supposed to be dead, killed long ago in a fire that haunts all those involved.

DI Amy Winter is still reeling from the discovery that she is the daughter of a serial killer, and her childhood trauma only makes her more determined to bring Ellen home. When another child is taken, Amy finds herself in a race against time. To rescue the children, must she seek help from the one person she wants to forget?

Ever since I read Truth And Lies  (the first book in the DI Amy Winter series), I’ve been eagerly waiting for The Secret Child to be published, and freaking hell it was definitely worth the wait. Amy’s biological parents are notorious serial killers, not the best background for a Detective I must admit! But that’s what makes this series refreshingly original and highly compelling. Before you ask “Yes” The Secret Child could be read as a stand-alone, but would I recommend it? No,  personally I think you need to read the books in order, Amy has such a fascinating and original backstory it would be a shame if you didn’t follow her disturbing tale from the beginning.

Amy is the Detective leading the case of the kidnapping of four-year-old girl Ellen, taken from her home in the middle of the night. Days later Ellen’s mother receives a parcel, along with a note, nothing strange about that you may think but the person who sent the parcel has been dead for years! Told across two timelines the author reveals a sorry tale, but my god it made for a nail-biting, heart thumping read. Although I would never condone kidnapping, I couldn’t help but feel empathy for a character whose own tortured childhood shaped the adult they become.

This book is as much about the characters as it is about the crimes committed, the author has created some fabulous characters, Amy, the kidnapper and her serial killer mother all added to my overall enjoyment of this read. Even from behind prison bars Amy’s evil mother Lillian Grimes continues to manipulate Amy and those around her, she’s one twisted mother ****** that’s for sure, and yet I couldn’t help being fascinated and disgusted in equal measures by her character, what makes a mother turn into a feared killer? How can she possibly consider herself to be a victim? Amy has her flaws like many a fictional Detective, but it’s hardly surprising when you consider who her parents are! The author gives an in-depth insight into Amy character, as she reveals more details of Amy’s very disturbing past, you can’t help but feel her pain and confusion, her constant dissecting of her personality looking for any psychopathic traits she may have inherited from her parents.

There is so much I loved about this book, the characters, the plot which draws on real events making it even more shocking, the shifting between past and present. Add to the fact The Secret Child is one of those reads that reels you in with a promising prologue and keeps you in its grips with an intense and captivating read, it’s definitely a series I would recommend to crime thriller lovers. I’m eager to see where Caroline Mitchell’s twisted imagination takes her next, and that’s the beauty of her writing no two books are the same, so roll on the next book which I will read come hell or high water. 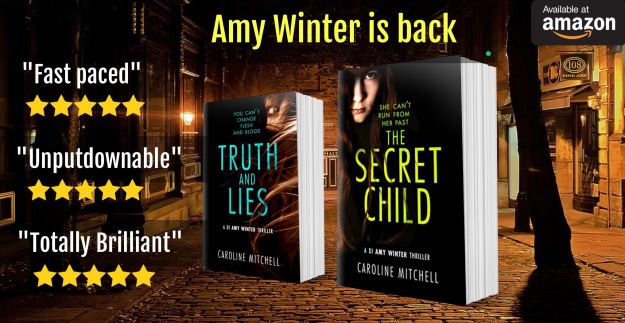