Today I’m thrilled to be one of the bloggers taking part in The Bitter End by Ann Evans and Robert D Tysal #BlogBlitz. Published by Bloodhound Books The Bitter End is a supernatural thriller, I must say I do love the sound of this book, and hope to read it at some point in the near future. I do have a guest post from Ann Smith which I really enjoyed reading, I hope you do too.

An Interview with my Character.

For this blog, I decided to speak to Father Wallace Willoughby, the parish priest and a neighbour of the protagonist, Paul Christian.

Although Father Willoughby is a diminutive little man, he’s something of a fire and brimstone preacher and his loud booming voice can rattle the windows! Even so, I didn’t expect the reaction I got from him.

He glared at me through those small round glasses of his, his voice fairly controlled – for the moment. “I’m afraid this is not a book I approve of,” he said. “In fact, I’m horrified that you could write about such dark and dreadful deeds.”

“It’s just fiction,” I reminded him, but he cut me short.

“The Good Lord did not grant you your writing skills to produce such heinous characters or such odious atrocities… and have you no thought for me?”

“Well at first yes, I was flattered that you’d created me and it all started so innocently. But I had no idea what you… and that other author fellow – Tysall, Robert Tysall, had concocted.”

“Yes, well, that was the idea,” I tried to explain. “You don’t want the reader to guess what’s coming.”

“I didn’t see what was coming!” he bellowed. “How could you? I remember when you used to write nice children’s stories.”

“I like to try different genres,” I said, smiling, hoping he’d understand.

He shook his head. “Alas, it is done, and the book – what is it called again – Ah yes, The Bitter End, is published and available for the world to read. And read it they will. You mark my words. The devil works in mysterious ways.”

“But it’s a fight for good conquering evil, Father Willoughby,” I reminded him.

He didn’t seem convinced and was actually a little sarcastic. “So, it’s a happy ending for all of the characters, is it?”

He sighed. “I shall be praying for the saving of your soul, my child.”

“I enjoy fiction!” he said in that booming voice. “I, just like the Holy Father in Rome, am extremely fond of television’s Father Ted for instance. But really, The Bitter End goes a step too far.”

The disdainful glance he cast me provided the answer.

I nodded and said goodbye, deciding it was probably best not to tell him that while he wouldn’t be in book two, possibly his older, and slightly stranger brother would be.

Paul finally has his life back on track. After losing his wife, Helena in a horrific car crash, he has found love with Sally and moves into her country cottage.

As a former high-ranking Naval Officer, Paul now works as Head of Security at MI5.

Paul has no memories from before he was ten years old. An accident left him in a coma for 9 months.  But was it really an accident?

Soon Paul starts to have flashes of childhood memories, all involving his childhood friend, Owen.

Sally introduces him to her friend, Juliet, the owner of a craft shop. Paul is shocked when he is introduced to Juliet’s partner, his old friend Owen.

Flashes of memories continue to haunt Paul, particularly the memory of his first wife Helena burning in the car crash.

As dark things start to happen, and local people begin dying in horrific accidents, Paul must face his past and will end up fighting for his life. 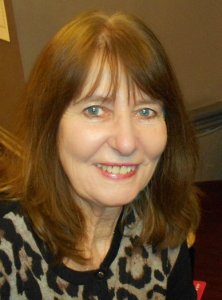 Ann Evans was born and bred in Coventry, West Midlands, and started writing just for fun after giving up her secretarial job to have her three children.

Having caught the writing ‘bug’ there was no stopping her, and as her children grew up, she continued to write for a variety of genres. She spent 13 years at her local newspaper as a Feature Writer as well as working freelance on magazine articles.

She also writes books for children, young adults, reluctant readers and some romance. (Ann Carroll) Her first adult crime novel, Kill or Die was published in 2017 by Bloodhound Books.

Having worked with writer/photographer Robert D. Tysall for many years through magazine work, Ann and Rob teamed up to write the supernatural thriller, The Bitter End – Ann’s first collaboration with another writer.  This will be published by Bloodhound Books in the summer of 2018.

Robert Tysall was born and brought up in Rugby, Warwickshire, and played the sport the town is famous for in his youth, until he discovered a passion and talent for photography, music and writing poetry and song lyrics. His career so far has been a busy mix of being lead vocalist and percussionist in bands plus working as a professional freelance photographer.

He is currently in a 60s, 70s & Beatles duo, and lives in Warwickshire with his wife, Heather. He has two grown up children. Rob is multi published on the photographic side of things with countless magazine articles, generally working alongside writer Ann Evans.

For many years he has dabbled with ideas for stories and finally the time felt right with this book. It seemed a natural turn of events for both Rob and Ann to team up and write The Bitter End together.

With his debut novel completed, now there’s no stopping him, and two more book collaborations with Ann are currently in the pipeline.