Today I’m sharing my review for the latest novel by Diane Chamberlain, The Dream Daughter. As a huge crime thriller reader, there are just a handful of authors outside this genre that I turn to when I need a “non crime fiction fix” and this author is one of them.

When Caroline Sears receives the news that her unborn baby girl has a heart defect, she is devastated. It is 1970 and there seems to be little that can be done. But her brother-in-law, a physicist, tells her that perhaps there is. Hunter appeared in their lives just a few years before—and his appearance was as mysterious as his past. With no family, no friends, and a background shrouded in secrets, Hunter embraced the Sears family and never looked back.

And all for the love of her unborn child.

A rich, genre-spanning, breathtaking novel about one mother’s quest to save her child, unite her family, and believe in the unbelievable. Diane Chamberlain pushes the boundaries of faith and science to deliver a novel that you will never forget.

I have long been a fan of Diane Chamberlain I just adore her books, now if I’m honest I had reservations about reading The Dream Daughter as I read on line that the author’s latest book is part science fiction, don’t get me wrong I’m not adverse to reading this genre I just couldn’t work out how a authors whose novels normally focus on very human story’s  could possibly incorporate science fiction into one of her story’s. After finishing this novel I have to admit the author has done a fabulous job, and the mix of genres exactly made The Dream Daughter a unique read which captured my imagination.

The Dream Daughter is a novel about one mother’s quest to save her child. Carly finds out that her unborn baby has a heart defect. There’s no treatment available in 1970, and the baby will likely not survive after birth. Her enigmatic brother in law Hunter has knowledge of treatment that could help Caroline’s unborn baby, but first he needs to convince her to take a mind-bending leap of faith. This description may seem vague but I’m desperate not to give away the heart of this novel and spoil the read for others. The way Diane Chamberlain has crafted a story of a mother’s love, risking everything she knows and believes, all for the love for her daughter was incredibly moving at times. If I’m giving you the impression The Dream Daughter makes for a depressing read I apologise, this novel also has uplifting and heartwarming moments that warm the heart.

Diane Chamberlain has a knack of creating characters that are not only multi dimensional but she also draws on the raw emotions the characters are feeling. You feel Carly’s despair, you understand her need to do everything in her power to save her daughter, you empathise when Carly has to make heart breaking choices, you feel like your alongside Carly on her journey. I’m really pleased the author decided not to give The Dream Daughter the ending  I envisaged, personally I found the authors conclusion to be a more satisfactory one (that’s why I’m not an author) it was definitely more fitting to the overall story.  Diane Chamberlain has written a multi-layered, genre crossing, complex novel that is both emotive and compelling, and a novel that I found a joy to read.

Steeped in history and filled with heart-wrenching twists, The Stolen Marriage is an emotionally captivating novel of secrets, betrayals, prejudice, and forgiveness. It showcases Diane Chamberlain at the top of her talent.

One mistake, one fateful night, and Tess DeMello’s life is changed forever.
It is 1944. Pregnant, alone, and riddled with guilt, twenty-three-year-old Tess DeMello abruptly gives up her budding career as a nurse and ends her engagement to the love of her life, unable to live a lie. Instead, she turns to the baby’s father for help and agrees to marry him, moving to the small, rural town of Hickory, North Carolina. Tess’s new husband, Henry Kraft, is a secretive man who often stays out all night, hides money from his new wife, and shows her no affection. Tess quickly realizes she’s trapped in a strange and loveless marriage with no way out.

The people of Hickory love and respect Henry but see Tess as an outsider, treating her with suspicion and disdain. When one of the town’s golden girls dies in a terrible accident, everyone holds Tess responsible. But Henry keeps his secrets even closer now, though it seems that everyone knows something about him that Tess does not.

As anyone who follows my blog will know I mostly read crime and psychological thrillers but every once in a while I like to move away from the “dark side” and pick up a book that’s very different to my usual read. I’m a huge fan of Diane Chamberlain and have been for a number of years I love her style of writing and I always find I quickly get immersed her books once I start reading them.

The Stolen Marriage is a very compelling historical novel with an element of mystery thrown in, set in the 1940’s in Hickory, North Carolina, like many towns of that era the author depicts a authentic picture of a small town steeped in racial prejudice, a polio epidemic and the hardships faced by people during World War Two. One moment of madness leads to Tess finding herself trapped in a loveless marriage to Henry, as she tries to adjust to married life she realises there’s a lot more to her new husband than meets the eye. When a polio epidemic strikes the town Tess, who has a nursing degree, ignores Henry’s wishes and begins to work at the hospital, finding meaning in nursing the young victims. Tess begins her story in crisis and self doubt but as The Stolen Marriage progresses she grows stronger through adversity.

The Stolen Marriage is an eye opener and thank goodness the 1940’s are well and truly behind us. Everything was so different then, interracial Marriage was prohibited and punishable by up to ten years in prison, and a woman working, unthinkable! these views sound unbelievable but unfortunately they were alive and kicking in the 1940’s, for me this novel gave an authentic insight into an age where things were so different. Diane Chamberlain has created a host of characters some more likeable than others, Henry Kraft was a character that I found hard to like, but I was surprised by the last third of the book I actually ended up feeling a great deal of empathy for him.

Diane Chamberlain has once again written a fascinating novel and one I’m sure her legions of fans will love. If I had one small criticism I thought the first half of the book was very slow, but in saying that the author uses this time to develop her characters. The one thing I really enjoyed about this book was the author’s attention to detail I really felt the town of Hickory came alive, it almost felt like I was stepping back in time to a town steeped in prejudice, snobbery and old fashioned views. It’s also obvious the author has spent a lot of time researching polio, and has written a very credible story. All in all I found this novel to be an throughly enjoyable read.The Stolen Marriage is a book that I would definitely recommend to those who enjoy a historical novel with some mystery thrown in. 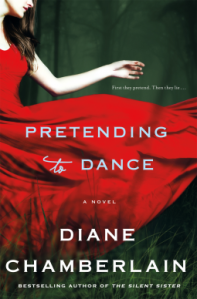 Molly Arnette and her husband are hoping to adopt a baby. But the process terrifies her. As the questions and background checks intensify, Molly worries that the truth she’s kept hidden about her North Carolina childhood will rise to the surface and destroy not only her chance at adoption, but her marriage as well. She ran away from her family twenty years ago after a shocking event left her devastated and distrustful of those she loved: her mother, the woman who raised her and who, despite Molly claiming is dead, is very much alive; her birth mother, whose mysterious presence raised so many issues, and the father she adored, whose death sent her running from the small community of Morrison Ridge.Now, as she tries to find a way to make peace with her past and embrace a future filled with promise, she discovers that even she doesn’t know the truth of what happened in her family of pretenders.

I always look forward to reading Diane Chamberlains latest offering, and pretending to Dance is her best book yet, but be warned you may need a box of tissues at hand, whilst you read it. Diane writes an incredible story, which is very sensitively told, despite the subject matter. Pretending to Dance is a combination of family drama, intrigue and suspense. Her detailed research into multiple sclerosis is obvious, and done sensitively whilst helping the reader to understand not only the physical limitations, but also the emotional challenges, this illness brings.

As we follow Molly’s journey to motherhood we learn more about the shocking events that to place during her childhood, I really felt for Molly and at one point cried along with her. This is what makes Diane Chamberlain a great story teller, she draws you into her books and brings her characters alive, making you care very deeply for them and the difficulties they go through.

A moving story and sensitively told, the reader will feel a whole host of emotions throughout Pretending to Dance, and it will keep you gripped to the last page. Many thanks to Netgalley and the publishers for an Advanced Readers Copy of this book in exchange for an honest review