The Next Big Thing

A complaint often levelled at movies, and Hollywood in particular, is that studios churn out the same old thing repeatedly. If it’s not a sequel, it’s a remake, or it’s something in a similar vein to an already popular franchise. It’s a complaint I sympathise with, though I see where the studios are coming from. With movies usually costing over $50 million to make – and the blockbusters often well in excess of $100 million – they need to have a lot of confidence they’re going to get their money back.

At the same time, the studios (and audiences) are curious about what the next big thing will be. Because audiences enjoy seeing the same type of stuff again, but we also want something different enough to get us really excited. Unfortunately, studios err on the side of caution.

That means the new and interesting stuff ends up being produced by independent film companies. They take the risks, and a lot of them fail because of a lack of profile and marketing budget, but occasionally something new and different appears. It’s nearly 20 years ago since it came out, but The Blair Witch Project was a good example, generating a sequel (the big studios got involved and it bombed) and influencing the development of several other movies filmed in similar ways – Paranormal Activity and Cloverfield, for instance.

Although the budgets are substantially lower, the same issue applies to publishing. In the main, publishers aren’t taking the risks they might have done twenty or thirty years ago. Instead, they’re churning out more of the same, because they know it’ll sell.

Shortly after completing Ravens Gathering, I made a trip the States and, as chance would have it, met someone who worked in the publishing industry there. I took the opportunity to pick her brains, and her advice was succinct.

“You might as well stick it on Amazon yourself. All the big publishing houses are watching Amazon’s stats, and if we see a book or author who’s doing really well, we’ll swoop in and offer them a deal.”

So the publishers want the Indies to do the experimenting for them.

Why did that advice resonate with me? Because Ravens Gathering doesn’t fit neatly into one of the genre pigeonholes. And it made me realise publishers were unlikely to want to experiment with it so, unless I dropped incredibly lucky, I’d be wasting my time with submissions. From that point of view, I had nothing to lose, and went down the Indie route.

Am I claiming Ravens Gathering is the next big thing? No. But it is different, so who knows? What’s clear to me is that, if I’d gone down the traditional publishing route, I’d probably still be waiting for a positive response, which means readers wouldn’t have had the chance to judge it for themselves. 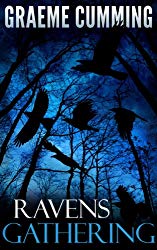 As she let her gaze drift around her, she saw that there were more birds. Perhaps a dozen or so, perched among the trees that stood on the edge of the clearing. And yet more were arriving, swooping down through the gap overhead and landing on branches that overlooked them. The birds weren’t threatening, yet the sight of them all coming together in this dark and isolated spot was unnerving. Tanya reached a hand out towards Martin, and was relieved to feel him take it. She felt him move in behind her. After the uncertainty she’d experienced with him in a similar position only a few moments ago, she recognised the irony of her reaction. His closeness offered security.
“You know what they are, don’t you?”

A stranger’s arrival in a small village coincides with a tragic accident. For the Gates family in particular it’s more than a coincidence, but unease increases following a brutal attack. As tensions rise, a dark past returns to haunt them and others, while newcomers to the village are drawn into a mystery with terrifying consequences.

And only a select few know why the ravens are gathering.

He first realised he genuinely had some talent when he submitted a story to his English teacher, Christine Tubb, who raved about it.  The same story was published in the school magazine and spawned a series that was met with enthusiasm by readers.  Christine was subsequently overheard saying that if Graeme wasn’t a published author by the time he was 25, she’d eat her hat.  Sadly, she probably spent the next 25 years buying her groceries exclusively from milliners.  (Even more sadly, having left school with no clear direction in life, Graeme made no effort to keep in touch with any teachers, so has lost track of this source of great support and encouragement.)

Having allowed himself to be distracted (in no particular order) by girls, alcohol and rock concerts, Graeme spent little of his late teens and twenties writing.  A year-long burst of activity produced a first draft of a futuristic thriller, Beyond Salvage, which has since lain dormant, waiting for a significant edit.

With the onset of family life, opportunities to write became more limited (though it could be argued that he got his priorities wrong), until he reached his early forties, when he realised he hadn’t written anything for several years.  Deciding to become more focused, since then he has written regularly.

With his interests in story-telling sparked by an excessive amount of time sitting in front of a black and white television, his tastes are varied.  Influences ranged from the Irwin Allen shows (Voyage to the Bottom of the Sea, Lost in Space, etc.) to ITC series (The Saint, The Champions, Randall and Hopkirk (deceased) and so many more), so the common theme was action and adventure, but crossed into territories including horror, fantasy and science fiction as well as crime and espionage.

This diverse interest in fiction continued with reading books and his discovery of the magical world of cinema.  As a result, his stories don’t always fall into a specific genre, but are always written as thrillers.

When not writing, Graeme is an enthusiastic sailor (and, by default, swimmer), and enjoys off-road cycling and walking.  He is currently Education Director at Sheffield Speakers Club, although he lives in Robin Hood country.  Oh yes, and he reads (a lot) and still loves the cinema.