Today I’m thrilled to be part of the blog tour for 55 by James Delargy. This is one book I want to read at some point it sounds fantastic. (Update I’ve actually just bought the book after reading Eva’s fab review on the blog tour  yesterday at noveldeelights)

This book has been described as a thriller with a killer hook, and an ending that will make you gasp! Intrigued? Me too but in the meantime I have a brilliant guest post from the author himself, but first the book description…… 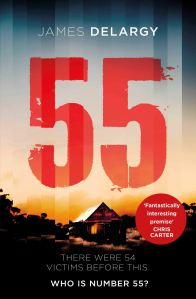 *** There were 54 victims before this. Who is number 55? ***
A thriller with a killer hook, and an ending that will make you gasp!

Wilbrook in Western Australia is a sleepy, remote town that sits on the edge of miles and miles of unexplored wilderness. It is home to Police Sergeant Chandler Jenkins, who is proud to run the town’s small police station, a place used to dealing with domestic disputes and noise complaints.

All that changes on a scorching day when an injured man stumbles into Chandler’s station. He’s covered in dried blood. His name is Gabriel. He tells Chandler what he remembers.
He was drugged and driven to a cabin in the mountains and tied up in iron chains. The man who took him was called Heath. Heath told Gabriel he was going to be number 55. His 55th victim.

Heath is a serial killer.

As a manhunt is launched, a man who says he is Heath walks into the same station. He tells Chandler he was taken by a man named Gabriel. Gabriel told Heath he was going to be victim 55.

Gabriel is the serial killer.

Two suspects. Two identical stories. Which one is the truth?

James Delargy has written one of the most exciting debuts of 2019. He masterfully paints the picture of a remote Western Australian town and its people, swallowed whole by the hunt for a serial killer. This novel has been sold in 19 countries so far and has just been optioned for film.

I like a number of genres of novels but I guess my love of Crime, Thrillers and Mystery novels comes from early on in my life. I would get The Hardy Boys novels from the library in school or in the next town over and go to bed reading them, often waking up the next day with my fingers in the pages where I had fallen asleep or the poor book sprawled on the floor beside the bed. Fingers in the pages was preferential as with a floor book I was left guessing where I had finished off.

After the Hardy Boys I moved onto other writers but the main one was Stephen King. I love his storytelling and was overawed by the range of styles and genres he could produce – horrors, dramas, crime, coming of age tales – all punctuated by characters and plots that were so engrossing. Of any writer I think that he has had the most influence in terms of wanting to write, even though it took to my thirties to turn to novel writing.

Despite this the book that might have influenced me the most is The Count of Monte Cristo, the innocent man seeking his revenge on those who imprisoned him falsely. I fell in love with the elaborate plot, the twists and turns and how his desire for revenge causes the protagonist to evolve from naïve, to vengeful, to compassionate.

Other writers to have influenced me include Chuck Palahniuk for the visual, sometime stomach-churning visceral nature of his writing. Ian Rankin for the depth of his characters and the world he creates. Val McDermid for her delicious plotting, mystery and characters. Colin Bateman for the characters, the setting and the sarcastic humour. Lee Child for the wit, plotting and energy of his books.

But there are many others in recent years such as, Cara Hunter, Jane Harper, Ann Cleeves, Simon Kernick, Joseph Knox, Steve Cavanagh, Michael Connolly and Fiona Barton. Not to mention novels such as The Great Gatsby, Catch 22, The Catcher in the Rye, One Hundred Years of Solitude, Dracula, Frankenstein, One Flew over the Cuckoo’s Nest and authors such as Edgar Allen Poe, Homer (not Simpson), George Orwell, John Steinbeck, James Ellroy, Dennis Lehane. An almost endless list. So I’ll stop there. Although no doubt I’ll remember someone in the next few hours that I’ll regret leaving out. Kazuo Ishiguro. Annie Proulx. Roddy Doyle. Irvine Welsh.

James Delargy was born and raised in Ireland and lived in South Africa, Australia and Scotland, before ending up in semi-rural England where he now lives. He incorporates this diverse knowledge of towns, cities, landscape and culture picked up on his travels into his writing. 55 is his first novel.

My thanks to author James Delargy and Ann Cater for the fabulous guest post. 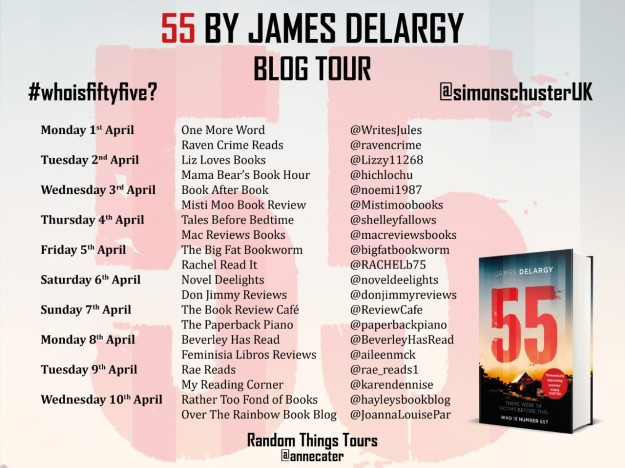