One of the things I’m hoping to do this year is read more true crime thrillers, so today I’m sharing my first #TrueCrime read of the year, as part of the blog tour for Ted Bundy The Only Loving Witness by Stephen. G. Michaud and Hugh Aynesworth.

Ted Bundy was America’s first celebrity serial killer, and one of the most chilling enigmas in criminal history.

Handsome, boyish and well spoken, a law student with bright political prospects, Bundy was also a predator and sexual deviant who murdered and mutilated at least thirty young women and girls, many of them college coeds, but at least two as young as twelve.

Penned by two journalists in close contact with Bundy’s friends and relatives, as well as spending 150 hours interviewing him on Death Row, Ted Bundy: The Only Living Witness is the definitive account of America’s most notorious criminal, as told by the people who knew him best.

Ted Bundy is arguably one of the most infamous serial killers in America, but who was Ted Bundy? over the years the notorious serial killer has been described as many things “intelligent, handsome, wholesome and even likeable” And then there’s the flip side, “a master of manipulation, cold, calculated and emotionally immature”.  This book takes away his celebrity status and shows Bundy to be much more of an “ordinary” serial killer than the “extraordinary” one the media have led us to believe. It reveals Bundy as a violent sexual sadist, who brutally raped, tortured and killed dozens of women, a man who showed no remorse for his crimes.

Many authors have attempted to get ‘inside the head of Ted Bundy’ and failed, probably due to the fact their information has been gained from transcripts, witness statements, and here-say. Ted Bundy The Only Loving Witness by Stephen. G. Michaud and Hugh Aynesworth is unique, as along with the facts of the case, it’s based on over a 150 hours of interviews with the killer.

Like many books that I have read about Bundy, the authors explore Bundy’s childhood, his crimes (although adequately descriptive it is not gratuitously graphic) and his trials, but they also explore the complex psychology of a deeply-troubled, emotionally-unstable young man. This book reveals the complexity of his personality and unravels the multiple masks he hid behind, the complexities of his character are validated by their personal interviews with the serial killer.

One of the things I found fascinating about this book was the fact that Bundy gives a third-person rumination in his interviews, based entirely on his own experiences, thus disassociating himself from his horrendous crimes. The authors also dispels many of the myths surrounding Bundy, by providing the reader with a wealth of information that’s based on fact, and the testimony of witnesses, friends and family.

Ted Bundy The Only Loving Witness is a chilling, well-written book, that gives the reader an insight into the nature and thoughts of a psychopath. It’s not an enjoyable read, and nor should it be considering it’s true crime, but it did make for a fascinating read. Ted Bundy described himself as “the most cold-hearted son of a bitch you’ll ever meet.” after reading this book I have to agree! A must read for those who enjoy a true crime read.

My thanks to the publishers for my ARC in exchange for an unbiased and honest review.

Check out the rest of the blog tour….. 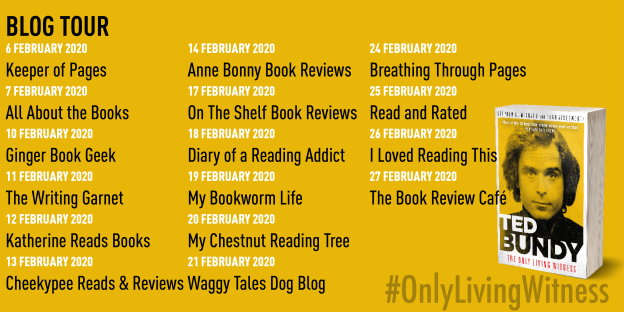